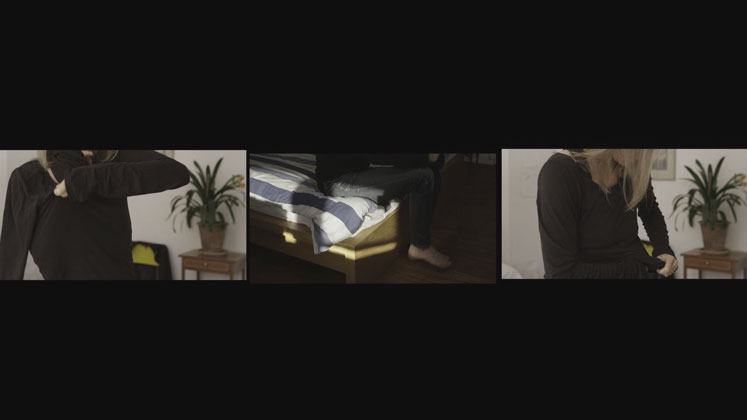 WHO COUNTS THE STEPS OF THE SUN;  INSTALLATION with three screens (2016)

About the film
by Annelie Axén
For most people daily life is full of routines. We get up in the morning, get dressed and go to work. During large parts of the day we are in a state where we do not notice the world around us: we act according to pre-settings. We make rational choices in order to achieve our goals in the most efficient way. Clock time is crucial. What would happen if we began to question this rational logic? If we chose to approach the world differently, could it be to our advantage?
Questions like these motivate the Berlin-based Swedish artist Ninia Sverdrup. In Who Counts the Steps of the Sun (2016), a video installation in three parts, she investigates our habitual ways and behaviour patterns. This leads her to questioning the most fundamental qualities of existence. Including clock time.
The film invites us to take part in a woman’s daily life at home with her husband and children, and at work. The family is played by Sverdrup’s own family, but there is something generic about the characters. They could have been other people in another anonymous northern European city.
Already in the opening of the film, there are tiny malfunctions in the daily routines. The dirty dishes doesn’t just get organized into the dishwasher, but also put back on the table, and rearranged according to principles that remain hidden to us. Similarly, the daily grocery shopping is performed as a counting game. When the woman is putting food into the fridge, she seems to be looking for a structure in the groceries. An order that she doesn’t quite seem obtainable. Or rather, is there a different kind of logic at play? – one that we simply aren’t aware of?
The film is structured around a series of rituals, or trials, that could be described as fundamental research into the modes of existence. There is a gaze that uses personal experience as a mode of reaching deeper insight. The camera is often fixed, using long shots, and the narrative is played out within a single scene. Instead of waiting for something to happen, we are invited to simply watch the existing: the room, the objects, the woman and her movements.
The sound of a watch ticking returns on numerous occasions during the film, and gives rhythm and spaciousness to the narrative. The clock starts off as a framework for the woman in her daily life, but eventually time becomes her companion, in a series of experiments engaging the senses and perception.
When we think about clock time we perceive every unit of time as a self-contained, separated moment. Sverdrup, on the other hand, is working with a more elastic concept of time, one that can be described as a pulsating presence. Time is neither linear nor circular: but rather an expression of duration. The woman’s movements in the room can be seen as a choreography, where time plays an active role. Here Sverdrup is returning to a subject she has treated in earlier works: how space-time is perceived in Japanese metaphysics. In her text ”Ma and the Four-dimensional Concept of Reality in Today´s Tokyo,” she describes how space-time is perceived as an anticipated silence, in which lies a potential for change. For each object there is a time-aspect. A wasp left by time; the seconds’ distance between hand and eye; time tied up in a pencil spiral.
In the end, time becomes one with its surroundings, and the clock is a metronome giving rhythm to the movements in the room – as well as to the film as a whole, which has been directed with a musical composition in mind.
The film can be seen as a personal critique of capitalist reification, with a gentle sense of humour and great insight into the processes and traditions of thinking. Behind Sverdrup’s beautiful, stripped down imagery there is an appeal to break away from the circle of consumerism and profit – through a resistance to efficiency and speed as the guiding principles of our lives. Instead we are introduced to a metaphysical experience that is hiding in everyday life, that we can access through changing our ways of paying attention, if even only a little.